Terry Prendergast is a South Dakota trusts and estates and trust company attorney at Davenport Evans. Terry joined the firm in 2017 with a prestigious career of nearly 40 years practicing law in Sioux Falls. Interacting with counsel and clients across the country and the world, Terry extols the virtues of South Dakota’s top-in-the-nation trust laws, flexible procedures and low tax environment, stating, “To open up people’s eyes to one of the best kept secrets in business—that South Dakota has a flexible, advantageous and responsive environment for business, estate and wealth planning, gives me great satisfaction.”

Terry has received an AV Preeminent® Peer Review Rating by Martindale-Hubbell®, for the highest level of professional excellence for his legal knowledge, communication skills and ethical standards. He has been selected to Best Lawyers® in the area of Trusts and Estates, the Best Lawyers® 2022 Real Estate and Infrastructure Edition in the area of Real Estate Law, and has also been ranked in the top 5% of practicing attorneys in South Dakota by Great Plains Super Lawyers in the areas of Estate Planning & Probate. Terry has a Band 1 individual ranking in the Chambers High Net Worth Guide in the area of Private Wealth law, and was ranked by Chambers and Partners in the area of Corporate/Commercial law. One Chambers commentator noted, he is “very good at creating trust companies and advising trust companies – he probably does more of that than any other lawyer in the state.”

Terry worked his way through college as a sports reporter for the Sioux Falls Argus Leader during the school year and sold books door to door for the Southwestern Company during 6 summers. As a die-hard sports fan, Terry helped in the start of the Northern League (the first independent professional baseball league) in 1992. He was a co-owner of the Sioux Falls Canaries independent minor league baseball team with Mike Veeck from 1998-2009, and can tell you about some crazy Mike Veeck promotions.

While not at the office, you will find Terry spending time with his wife, Susan, two sons and a daughter-in-law. Terry enjoys all types of spectator sports, travel, and reading. You can always find Terry under the basket in the front row at Augustana basketball games helping the referees, or in the front row at Sioux Falls Canaries games assisting the umpire.

Statements on this page do not constitute a guarantee, warranty, or prediction regarding the outcome of your legal matter or athletic season. 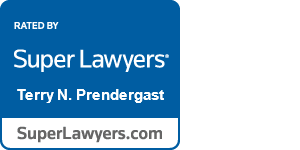