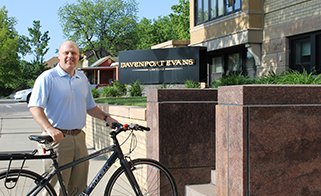 Sioux Falls lawyer Keith Gauer, who practices at Davenport Evans, typically joins the urban masses each morning in their daily commute by car through the city. But as many downtown business people flooded the trails and roadways for Sioux Falls Bike to Work Week, Keith started introducing the trend as a weekly habit. “My ‘commute’ includes a 6 mile bike ride, most of which is on the city’s bike trail,” he explained, “I only see one stoplight the whole way!  It is a wonderful beginning and end to a downtown workday.”

Sioux Falls has worked hard in recent years to become a bicycle-friendly city, adding new bike lanes and safety campaigns, as well as abundant maps and resources online. But the city was truly a pioneer with its well-maintained bike trail system. The Sioux Falls bike trails loop runners and riders of all ability levels along 18 miles of the meandering Sioux River, under a canopy of trees and through the bustling downtown district to the Falls.

For tips on bike commuter safety on the trails or city roadways, visit Where to Ride from the City of Sioux Falls.