Observations on the Legal Ramifications of Justice Scalia’s Death 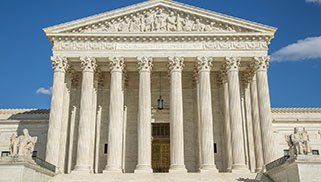 As published in the Independent Community Bankers of South Dakota newsletter, April 2016 edition.  Sign up for ICBSD e-news here.

United States Supreme Court Justice Antonin Scalia passed away on February 13, 2016 while on a hunting trip in Texas. His death has set in motion a series of political battles and maneuvers between the Republican controlled Senate and President Obama. On the one side, the Republican Senators argue that a “lame duck” President should not be allowed to put his stamp on the Supreme Court by making another lifelong appointment to the Bench in the waning months of his Presidency. On the other side, the President and Senate Democrats accurately note that the term of the Presidency as outlined in the Constitution is four years and not three and assert the President’s continuing right to appoint members to fill vacancies in the high Court. In an effort to press Republicans, President Obama quickly selected Merrick Garland, a moderate Court of Appeals Judge, to succeed Justice Scalia. The stakes are high given Justice Scalia’s prominent role as a stalwart and outspoken conservative voice on the Court. He was also routinely counted as a supporter of business rights and his absence has reportedly already caused the settlement of a high profile class action lawsuit, with the corporate defendant specifically citing Justice Scalia’s death as one of the factors dictating the settlement of the claim.

While this political battle rages onward and has yet to be resolved as of the writing of this article, the day to day business of the Supreme Court must go on. Under normal circumstances, the Supreme Court is composed of 9 Justices, nearly eliminating the possibility of a tie when votes are taken. However, with only 8 active Justices on the Court, ties may become the routine rather than the exception. While the inner workings of the Supreme Court remain shrouded in secrecy, it seems likely that multiple cases were under consideration as of Justice Scalia’s death. Since a decision is not final until it is announced, Justice Scalia’s death could well force reconsideration and re-voting on cases currently under consideration.

Under Supreme Court procedures, if the vote of the Court results in a tie, the decision of the lower court is upheld. In a highly watched case involving mandatory union dues, the Court recently announced a 4-4 deadlock tie, affirming a “pro union” ruling from the lower court. The tie vote was announced in a simple one line opinion from the Court noting that “[t]he judgment is affirmed by an equally divided Court.” Some pundits have interpreted the ruling as a veiled message from Chief Justice Roberts to the President and Senate that the Court needs a new Justice appointed as soon as possible.

While the make-up of the Supreme Court may often seem to have only a very remote impact on a community banker in South Dakota, a second recent decision underscores the issues raised by a divided court. For many years, courts at various levels have struggled with the application of the Equal Credit Opportunity Act (“ECOA”) to bank demands for spousal guarantees to secure loan indebtedness owed by a debtor spouse or corporate borrower. On March 22, 2016, the Supreme Court announced another 4-4 deadlock decision in a case arising out of the Eighth Circuit Court of Appeals, the Circuit hearing appeals from the District Court in South Dakota.

In Hawkins v. Community Bank of Raymore, Community Bank of Raymore made a series of loans to PHC Development, LLC. When it made the loans, the Bank required personal guarantees of the PHC debt from the owners of the PHC entity and, additionally, guaranties from Valerie Hawkins and Janice Patterson, the wives of the owners. When the loan went into default, Hawkins and Patterson sued Community Bank seeking to have their personal guaranties declared void and unenforceable under the Equal Credit Opportunity Act (the “ECOA”) and its implementing regulation, Regulation B. Hawkins and Patterson asserted that the Bank’s action in requiring them to guarantee the loan to PHC amounted to unlawful discrimination under the ECOA.

As most bankers know, the ECOA provides that it is “unlawful for any creditor to discriminate against any applicant, with respect to any aspect of a credit transaction… on the basis of … marital status.” 15 U.S.C. §1691(a). Hawkins and Patterson contended that they were “applicants” within the meaning of the statute and that they were discriminated against when they were required to sign guaranties of the debt. Hawkins and Patterson lost this argument at both the District Court and Circuit Court of Appeals. In each instance, the respective courts determined that Hawkins and Patterson were not, in fact, “applicants” for credit under the terms of the ECOA. In the courts’ view, since they had not specifically applied for credit in their own name, they were outside of the definition of applicant in the statute. Since Hawkins and Patterson were only asked to guaranty the debt of PHC, the lower courts each held that they were not applying for credit themselves and that, accordingly, they were not applicants within the meaning of the statute. Furthermore, the Eighth Circuit cited past precedent noting that the ECOA was passed, in part, to protect wives seeking to establish credit in their own names and forbidding creditors from requiring a wife to obtain a guaranty of her husband if she otherwise qualified for credit in her own name. Under this analysis, the focus of the ECOA is on the fair access to credit and not the rights of voluntary guarantors participating in a commercial credit transaction originally applied for by their spouses. Obviously, the decision of the lower courts was very “bank friendly” as it essentially shut the courthouse door to spousal attempts to evade the terms of their personal guaranties utilizing the ECOA.

Ultimately, as noted above, the Supreme Court’s 4-4 decision in the appeal of the Hawkins v. Community Bank of Raymore case operates as an affirmation of the Eighth Circuit Court of Appeals’ decision dismissing the spouses ECOA-based claims. At this point, the Eighth Circuit’s decision forms valid and binding precedential authority on courts within the Eighth Circuit, including the Federal District Court in South Dakota. However, a 4-4 decision by the Supreme Court does not establish the “law of the land” for the other Circuits in the country. The Sixth Circuit Court of Appeals, for instance, has rendered a contrary decision, finding that a non-debtor spouse is an “applicant” under the ECOA who can bring claims to invalidate an improperly required guaranty. As a result, banks in Kentucky, Michigan, Ohio, and Tennessee (the states within the Sixth Circuit) may still be faced with lawsuits seeking to invalidate spousal guarantees based on the ECOA.

Given that the ECOA is federal law, it is less than ideal for it to be subject to divergent interpretations across the country and this type of “split of the Circuits” is ordinarily a situation in which the Supreme Court is inclined to accept a case for ruling. However, it is also possible that the Supreme Court will take up the issue again once a new Justice is appointed to take Justice Scalia’s place on the Court. Yet another wrinkle could be presented to the foregoing if a Democrat were to be elected to the Presidency. In that event, the Republicans may well push to confirm Merrick Garland as soon as possible after the election in order to avoid a nomination fight over a jurist viewed to be more liberal than the moderate Garland. After all, Garland’s appointment to the Circuit Court bench in 1997 was approved on a 76-23 vote of the Senate, including votes in favor by 32 Republicans.

Finally, the political battles over the President’s right to appoint the next Justice could have an impact on the Supreme Court’s decision in the controversial Midland Funding v. Madden case. In the Midland case, the Second Circuit held that the National Bank Act does not preempt state law usury claims against a purchaser of indebtedness originated by a national bank. The decision has been roundly criticized by participants in the credit marketplace and followers of federal preemption law. As of now, the Supreme Court has not agreed to hear the case, but if it does so in the next few months, pundits believe a decision could be rendered prior to the appointment of a new Justice by the next President. The decision in this case will be one of many intriguing political and legal stories to unfold over the coming months. It will be very interesting to see how these political battles impact the business of the Supreme Court.