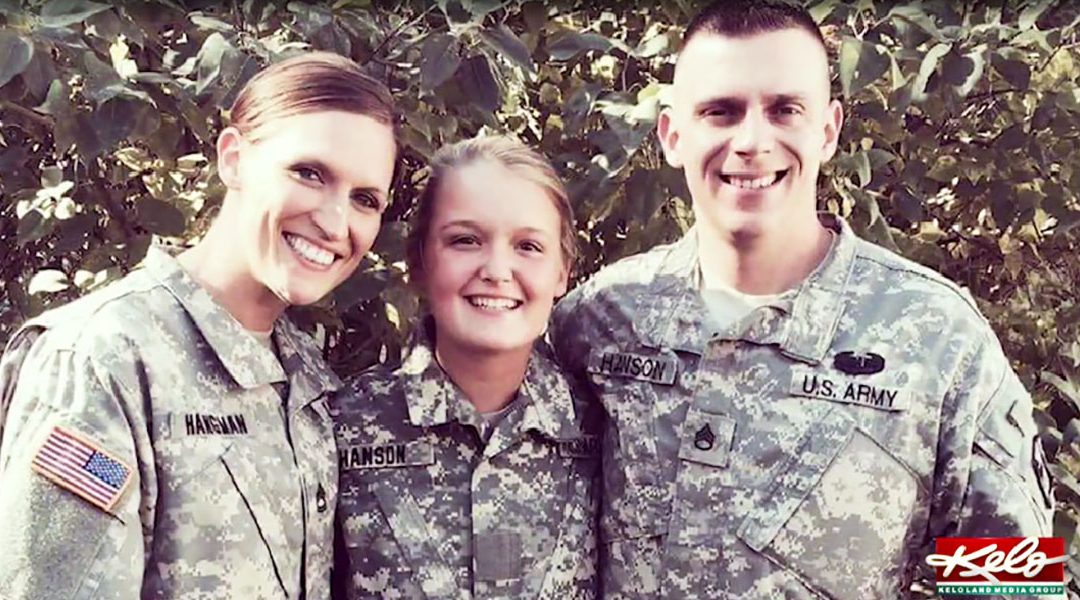 A Tradition of Service

Our third Remarkable Woman nominee, Rachel Hangman, has many titles to her name, from Sergeant 1st Class, to coach, to mother, all of which inspires her to help younger generations. “I was on my way up to SDSU my sophomore year of college and that’s where I was when I heard the planes hit the building,” Hangman said.

Just weeks after 9/11 Rachel Hangman went with her younger brother to meet with an Army recruiter and decided to enlist. “My husband, my cousin, my brother, my baby sisters, my daughter, it is truly a family tradition,” Hangman said. It’s a tradition of service Rachel is now working to start in many families around the region. She has spent 17 years as a full time recruiter in the Army National Guard, helping more than 250 KELOLAND students find their passion in the guard.

One in a Million Baby

She’s gearing up for her husband’s second deployment, this time as a mother of four. “My husband deployed in 2010, 2011 to Afghanistan, we knew when he came home that we wanted to try for another child. We tried for five years,” Hangman said. After several miscarriages, IVF and meeting with fertility specialists, Rachael and her husband were told it was unlikely they’d be able to have any other biological children. “It’s horrible. It’s a nightmare, and unfortunately a lot of people in society, once you start having those problems, you realize how common it is,” Hangman said. But then their miracle happened. “One in a million baby; this is amazing,” Hangman said.

They found out they were pregnant with Lincoln. Rachael kept on recruiting and coaching girls basketball in Tea all the way up to his arrival. “When he came out, the doctor said he was having a hard time holding his oxygen,” Hangman said. “They’re like, ‘His abdomen looks a little large. We’re just going to run some scans and see how things are going.’” Lincoln was diagnosed with a rare kidney condition called ARPKD, which led him to fight for his life when he was just a few months old.

They spent the next two months in the Pediatric ICU. It’s an experience that has sparked a forever bond between Hangman and the Sanford Children’s Hospital. “I sat at the Castle many days and thought about what can I do, how can I make these people feel better?” Hangman said. She is now organizing ‘Lunch with Lincoln’ every month, providing families at the Castle with a meal from T.C. Referees right to their room. “I didn’t want to leave my kid. I didn’t want to leave his side, so I can imagine other people don’t want to leave their child either,” Hangman said.

Lincoln’s medical concerns are far from over. He will need a kidney and liver transplant in his lifetime, but Rachael says she will continue to work to serve others through his journey. A perseverance and determination that sets her apart as a Remarkable Woman.

Earlier this year, Davenport Evans Law Firm partnered with Keloland Television to seek nominations for the Remarkable Women of KELOLAND Initiative. KELOLAND received dozens of incredible nominations and has selected four finalists to share more of their stories. They will announce one finalist per week on KELOLAND Living. Read their full stories here. The third finalist was announced February 25, 2020.

Remarkable Women of KELOLAND, presented by Davenport Evans Law Firm, is part of a nationwide Nexstar Media initiative to honor the influence that women have had on public policy, social progress and quality of life. You can learn about all four nominees in our Remarkable Women special which airs Tuesday, March 3rd at 6:30 PM, on KELOLAND Stations. The local winner will be announced March 6.