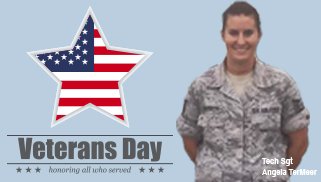 On Veterans Day, the attorneys and staff at Davenport Evans pause to say thank you to all who currently serve or have served our nation in the armed forces. We say a special thank you to attorney Justin Clarke, a veteran of the United States Army; legal assistant Kris Dumdei, who served with the 730th Area Support Medical Company of the South Dakota Army National Guard, and paralegal Angela TerMeer, who currently serves as a Technical Sergeant and paralegal for the 114th Fighter Wing of the South Dakota Air National Guard. Angela was recently honored for outstanding service by her unit. Please read below regarding that service.

We also wish to acknowledge the service of two Davenport Evans sons. Steve Brown, son of attorney Jon Brown and wife Karla, is serving as a Blackhawk pilot and first lieutenant in the United States Army with the 16th Combat Aviation Brigade at Fort Lewis, Washington. Josh Jackson, son of paralegal Shawn Jackson and husband Jeff, is serving as a medic in the United States Army, with the 2-12 Field Artillery at Fort Carson, Colorado.

Technical Sergeant Angela TerMeer has been a paralegal for the 114th Fighter Wing, South Dakota Air National Guard since 2011. Prior to that, she served as a paralegal in the Active Duty Air Force for over nine years.

To become fully eligible for NCO of the Quarter, each nominated candidate must:

Davenport, Evans, Hurwitz & Smith, LLP congratulates Angela TerMeer on this honor, and thanks on her outstanding service to our nation. 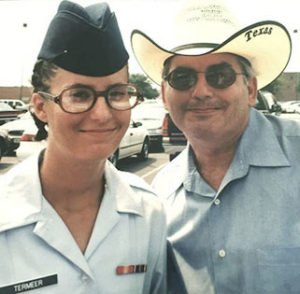