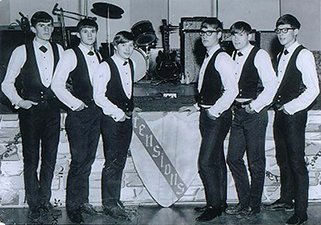 Just when you think you know a guy. Davenport Evans lawyer Doug Hajek is reputed across the state of South Dakota for his knowledge of the banking industry and public policy, as well as his diplomatic nature. A banker-turned-lawyer, Doug also has that intangible gift of a true South Dakota native-son. That ability to recall the names of community pillars in small towns, plus anecdotes about their children’s collegiate athletic careers. Doug has more LinkedIn connections than most millennials.

So perhaps the partners at his law firm in Sioux Falls shouldn’t have been caught off-guard when he mentioned, with some hesitation, that he and his rock band from the 60’s were to be inducted into the South Dakota Rock and Roll Music Association Hall of Fame, adding, “Surprising, isn’t it?”

Davenport Evans was intrigued to learn that Doug once stood just blocks away from the firm on a flatbed trailer getting down to tunes from James Brown, the Buckinghams, the Temptations, and Wilson Pickett. His band, The Tensions, consisted of seven high school musicians out of Tyndall, Wagner, Scotland, and Menno, South Dakota. Bandmates Dennis Cokeley, Dennis Gale, Fred Sayler, Doug’s brother Don Hajek, Dan Kubel and Bob Bainbridge, must have sounded pretty good on Phillips Avenue that summer day in 1967, because they won a 14-contestant Battle of the Bands. Doug played trumpet and trombone to the group’s soul, rhythm and blues. And as the photos demonstrate, they played in style. As Doug recalled, “like many other ‘horn’ bands, we wore formal clothing with sparkly blue jackets!”

The late 1960’s were great years for traveling bands in South Dakota. The Tensions “learned from all the bands that came through Groveland Park Ballroom, which was inducted into the Hall of Fame in 2013.” The band played proms and events at many high schools and colleges, and Saturday night dances at ballrooms throughout South Dakota, including Tyndall, Milltown, Lake Andes, Dell Rapids, and Spearfish, as well as the Mitchell Roller Drome, the Casino Ballroom in Watertown, and Horatio’s (Hort’s) in Brookings. Their agent, Jimmy Thomas, kept The Tensions busy, and also included ballrooms in Southwest Minnesota and Northwest Iowa on their circuit.

Doug stayed with the band through his junior and senior years of high school. Once he entered college, he said, “My college extracurriculars, including the Pride of the Dakotas Marching Band, swallowed up all available time. So as much as I enjoyed my two years with The Tensions, it was time to give it up.” The Tensions will be inducted into the South Dakota Rock and Roll Music Association Hall of Fame Saturday, April 16 at 6 p.m. at the Ramkota Inn Exhibit Hall in Sioux Falls.