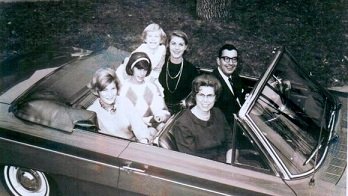 The following is an excerpt from the Argus Leader article, “Recalling a true city pioneer” from Stu Whitney, in memory of Charline Smith, wife of Davenport Evans co-founder Deming Smith.

When we think of the “Greatest Generation,” wise and weary veterans come to mind, their World War-II era sacrifice transitioning into societal contributions that made America brave and free. If it’s possible to consider housewives in that context, Charline Smith fits the bill.

As someone who spent nearly 70 years making Sioux Falls a better place through community involvement, volunteerism, philanthropy, and family values, Smith understood that merely tending to her own flock was not enough. Being part of a great generation meant understanding the greater good.

“Charline always did what needed to be done, and she always did what she said she would do.” longtime friend and retired lawyer Cathy Piersol said of Smith, who died Jan. 5 at age 97 and was honored Saturday at a memorial service at First Presbyterian Church.

“Whenever I walked into a room and Charline was there, everything seemed like it was going to be OK,” Piersol added. “She was well-grounded, she loved people, and she was determined to do her share.”

An interest in the arts led Smith to serve on the board of a small Augustana College orchestra that became the South Dakota Symphony under her guidance. She also served on the board of Sioux Valley Hospital and became a notable benefactor of Sanford Health, in addition to involvement with the YWCA, Children’s Home Society and Daughters of the American Revolution.

Many of her contributions came in tandem with her husband, Deming, a founding partner in the law firm Davenport, Evans, Hurwitz and Smith. After his death in 1996, Charline showed her independence by forging ahead with her favorite causes and displaying keen financial sense.

“She was the first woman to serve on a lot of these boards,” said Candy Hanson, former CEO and now senior advisor for the Sioux Falls Area Community Foundation. I would say that Charline was driven by a sense of duty. She had an enormous faith that if you tended to what was in front of you, things would turn out all right.”

Growing up during the Depression in the western Iowa town of Denison, not exactly the mecca of Midwestern culture, Charline found herself drawn to music.

That led to a perfect match with Deming, her future husband, whose mother was a singer and director of the church choir in the Iowa town of Toledo. They met at a big-band dance at the University of Iowa, where Deming studied law and Charline earned a master’s degree.

She wore a gardenia in her corsage and talked about the band. He explained how he loved to sing and, on their first date, spoke of how his future children would all take piano lessons.

“Music is in a way spiritual,” Charline said years later, “There’s music in the air all the time. It lifts you out of yourself and makes life richer.”

The young couple was married on New Year’s Day in 1943 and Deming went off to serve in the Army during World War II. Charline took a job with a laboratory that made self-sealing gas tanks to support the troops.

Following the war, Deming had employment opportunities in Chicago. But he had a connection in Sioux Falls with fellow lawyer Louis Hurwitz and saw more opportunities to make a lasting impact in South Dakota.

“He chose Sioux Falls over Chicago because he felt they could truly be involved in the community,” says Carolyn Riley, 71, the oldest of four daughters raised by Deming and Charline. “As it turned out, to say they were involved with the community was a gross understatement.”

Early in their marriage, Deming heard his wife answer the phone as “Mrs. Deming Smith” and quickly chastised her for assuming a secondary role.

The meaning was clear. Rather than settling for the stereotypical status of housewife shadowed by a hard-working husband, Charline would have her own identity. The Smiths would operate separately but also as a team to raise a family and pursue their interests in Sioux Falls.

“I never saw my mother sit down and read a magazine,” said Becky Field,” 69, the second-oldest daughter. “She was always on the move.”

In 1951, the family moved into the three-story house at 24th Street and Phillips Avenue near McKennan Park, a brick and stucco structure built in 1922 that Charline would call home for 54 years.

As their father had foretold, all four daughters – which included Cindy (now 65) and Leesa (59) – took piano lessons, filling the house with hopeful music from morning to night. They also took up other instruments, from flute to bassoon to clarinet and drums.

“A lot of times we practiced piano before school,” recalled Carolyn, ” who lives in Minnetonka, Minn. “In the evenings, Dada would always sit behind us in his chair and if someone hit a clunker, he would say, ‘Eh.” It was the same way with report cards. There was a lot expected of us.”

As Deming sang with the First Presbyterian choir and the Post 15 Singing Legionnaires, Charline’s musical interest led to a board position with the Augustana College Town and Gown Orchestra, which became the Sioux Falls Augustana Symphony during a meeting at her kitchen table.

When it became the South Dakota Symphony in 1966, she was the first woman to lead its board of directors and was a devoted fan and financial supporter for the rest of her days.

“If I had a solo and she liked the way I played it, she would always make sure she mentioned it,” said friend and fellow First Presbyterian member Chris Hill, who has played clarinet in the orchestra for nearly 30 years. “Our symphony literally would not exist without people like Charline, and we have other “Charlines” now. People she helped raise, so to speak, to carry on the cause.”