Can Your Bank Compete with Amazon? 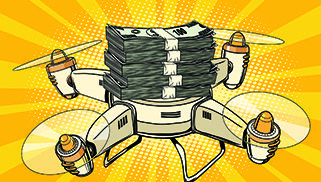 Remember the good old days when Amazon was a sleepy online used book seller?  Those heady days of 1997 are clearly over, states Davenport Evans lawyer Keith Gauer. Amazon has grown exponentially from its IPO in 1997 to become a one-stop consumer shopping center.  Amazon markets virtually anything a consumer may want, from toilet paper to kitchen appliances, from musical instruments to consumer electronics, and everything in between.  Amazon’s CEO recently stated that 100 million households have signed up for Amazon’s “Prime” service and certainly many additional consumers use the site for shopping needs without paying the annual fee for the Prime service.  Given that the United States population includes approximately 325 Million people in 135 million households, Amazon’s market penetration is mind boggling.

Based on Amazon’s two decade quest to dominate the online consumer retail space, it should come as no surprise that the company recently expressed an interest in expanding into the area of consumer financial services.  According to a Bloomberg report, Amazon is in initial talks with JPMorgan Chase and Capital One surrounding a private label checking account program.  The news leaks suggest that the program would initially target younger customers who are adverse to bank credit card products typically used to pay for purchases on Amazon’s site.  The business plan would seem to contemplate latching onto these customers early, capturing data regarding both their Amazon transactions and other spending with the card, and utilizing that data as the customers mature.  Instead of attempting to surmount the regulatory obstacles to setting up a new bank charter, including the possibility that Amazon would become a bank holding company, Amazon is seeking a bank to partner with in marketing and delivering financial services.  Considering its enormous customer base, we suspect banks will be eager to partner up with Amazon.

Given Amazon’s success in taking on entrenched retail behemoths such as Walmart and Target, this development should be of concern to any bank offering consumer financial services, including checking and savings accounts and debit card products.  While Amazon does not appear to be seeking a separate fintech bank charter at this point, it clearly intends to displace traditional bank checking accounts.  To the extent community banks intend to compete in this space, they will probably need to adopt sophisticated online banking software, including both traditional website products and mobile friendly applications allowing customers to perform many functions, including new account applications, electronically.  In addition, electronic consumer-friendly services such as remote deposit capture for checks, large fee-free ATM network access, and online bill pay features have likely become the norm as opposed to the exception.  Finally, community banks may be able to compete by focusing on a local presence and the ability of the customer to come to the Bank and speak to a real person if necessary.

Davenport Evans has significant experience in developing and marketing online financial services, including negotiating contracts with third party vendors and reviewing online strategies and materials to ensure legal compliance. Call or email your Davenport Evans lawyer to discuss your options.