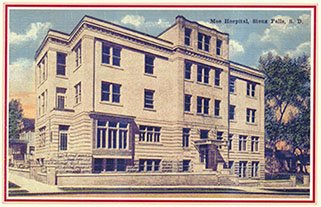 On January 16, Argus Leader contributor Eric Renshaw wrote an article featuring the history of the Main Avenue Davenport Evans building, formerly Moe Hospital. When it was built, the 5-floor hospital building was described as “a modern, all-fireproof structure of handsome architecture of cream colored brick” with “a beautifully designed and finished interior of Italian and Tennessee marble.”  Today, visitors regularly stop by to inquire about the building’s history, including descendants of children born there. The law firm has developed a card with the historical photo and the story of the building to help share its story.  The following is the article published by the Argus Leader. More information about the building and the history of Davenport, Evans, Hurwitz & Smith, LLP can be found on the Our Story page of www.dehs.com.

Eric Renshaw, for the Argus Leader

The beautiful building at 14th Street and Main Avenue has stood there since 1917, though it seems more modern than that. Many will be surprised to learn that it was once a hospital.

Dr. Anton Moe was born in Trondheim, Norway, on Feb. 12, 1868, to John and Annie Moe. John was a regular army officer in Norway but felt the call to a distant land called America.

The Moes moved to the United States in 1882 when Anton was 14. Anton attended public schools in Sparta, Wis., where they lived upon arriving in the States. His family was not wealthy enough to provide Anton with private boarding schools, so he graduated from public school and worked his way through the University of Wisconsin, graduating in 1892 with a Bachelor of Arts degree. He taught school for several years to pay his way through medical school, becoming the superintendent of schools in Forest County, Wis. He attended Rush Medical College in Chicago, graduating in 1897.

In June of that year, Anton married Frances Favor in her hometown of Viroqua, Wis., and went on to practice medicine in Chicago for a year before moving back to Wisconsin to practice his craft. In 1902, Anton and Fannie moved to Heron Lake, Minn., to build and operate a hospital, taking with them their young sons, Anton Jr. and Edgar Allen.

Southwestern Minnesota Hospital was built in Heron Lake in 1903 and looked like many hospitals in the area, which is to say it looked like a big house. It soon would expand to meet the growing demand in the area for medical practitioners. Moe practiced medicine, including surgery, while his wife took on the duties of operating the nursing school there and later served as superintendent of the hospital.

While at the facility, Moe performed more than 2,500 surgeries, most of which were appendectomies.

In Lake Heron, he was very active in many social clubs and fraternal organizations, including the Free Masons and Elks. He was active in the Lutheran church and, after serving on the city council, held the office of mayor for seven years.

In 1917, Moe moved with his family to Sioux Falls to begin his practice here. He left Southwestern Minnesota Hospital in the capable care of Drs. Torkelson, Stevens and Allen.

The Moe Hospital, at the corner of 14th Street and Main Avenue in Sioux Falls, opened in 1917. Here Moe practiced surgery and delivered many of Sioux Falls’ babies of the day. He worked at his eponymous hospital until he died in 1939. The hospital closed soon after his death, and the building was sold in 1941 to the National Reserve Life Insurance Co.

It was purchased in 1958 by the legal firm of Davenport, Evans, Hurwitz and Smith, which still occupies the space. There have been some changes to the building, but it’s still recognizable. The firm acknowledges and celebrates the history of its building on its website.

Anton Moe and his wife are buried at Woodlawn Cemetery.

Eric Renshaw of Sioux Falls has written the book “Forgotten Sioux Falls” and gives a historical perspective on his website GreetingsFromSiouxFalls.com.

Davenport, Evans, Hurwitz & Smith, LLP, located in Sioux Falls, South Dakota, is one of the State’s largest law firms. The firm’s attorneys provide business and litigation counsel to individuals and corporate clients in a variety of practice areas. For more information about Davenport Evans, visit www.DEHS.com.