In a June 11, 2015 Argus Leader article by Jill Callison, Davenport Evans lawyer Mitch Peterson looked back 20 years, to the day when he graduated from Washington High School with 14 scholarship awards.  According to the article, walking away from his undergraduate loans allowed Peterson to return to his hometown of Sioux Falls. He joined Davenport Evans law firm in 2002 and has been a partner since Jan. 1, 2008.  One of the scholarships Peterson received was the Davenport Evans scholarship, offered annually over the last 28 years to eight local senior choosing to attend South Dakota colleges or universities.  For scholarship application information, contact the Sioux Falls Area Community Foundation at www.sfacf.org or call 605-336-7055.  Read below for the full article, from www.argusleader.com. 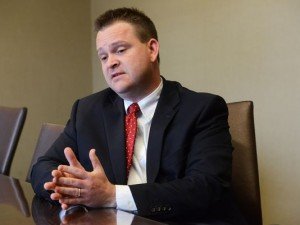 Mitch Peterson headed off to college in 1995 unworried about how he would afford tuition.

That is because he graduated from Washington High School with 14 scholarship awards, enough to make sure that his freshman year would only require funds from his part-time job at a grocery store bakery to pay for items such as car insurance and late-night snacks.

“Fourteen is still an incredible number,” said Heavlin, a counselor for seven years. “A couple of years ago I had a student who applied for a lot of scholarships and she got about 10. I think scholarships have become so much more competitive now in the last 10 years.”

Peterson graduated from the University of South Dakota, then attended Vanderbilt Law School in Nashville, Tenn. He graduated from Vanderbilt, although he spent his third and final year at the USD law school.

He did borrow money for school expenses once, a couple thousand dollars between his junior and senior years, Peterson said. That is because he cut down on his work hours so he could devote that summer to preparing for his LSAT, a standardized test the precedes admission to law school.

While he did incur debt at law school, walking away from his undergraduate loans allowed Peterson to return to his hometown of Sioux Falls. He joined Davenport Evans law firm in 2002 and has been a partner there since Jan. 1, 2008.

“I still had pretty significant debt but (low enough) that I could come back to Sioux Falls,” Peterson said. “I did market research on what fresh lawyers were making out of law school, and I could easily have made double what I would here in Sioux Falls if I had gone to a large metropolis. But I didn’t need to do that. I don’t know, however, if I would have been able to do that if I had a full load of undergraduate and law school debt.”

Peterson had worked at the Sunshine Food Market bakery through high school and continued for two years while he attended USD. To this day, it remains his second-favorite job, he said, since it offered autonomy, a list of what needed to be done and when those things should be done, and allowed him to interact with customers.

“I still love cake doughnuts,” Peterson said. “Cake doughnuts. Everything else is a roll.”

Peterson’s scholarships were listed in the program for Washington’s student recognition night, a former spring ritual that has been replaced by Honors Fest. His biggest awards came from USD with a Presidential/Alumni Scholarship and the Rawlins Scholarship.

Among the private scholarships came one from his future law firm, Davenport, Evans, Hurwitz, and Smith. Scholarships still are awarded annually to eight students from the region who will attend South Dakota colleges.

“If there weren’t good-quality students staying in South Dakota to be the leaders, there wouldn’t be any businesses for law firms to service,” he said. “We want to keep the next generation of leaders here and not have them sprinkled across the country.”

This year’s senior class must start thinking about scholarships shortly after their senior year starts, Heavlin said. The busiest time will be in January through March, while colleges such as USD and South Dakota State Universities close applications in mid-January. As college tuition costs rise, more and more students are taking advantage of scholarships, Advance Placement classes and dual-credit opportunities to defray the cost of higher education, she said.

Peterson, today married with two daughters, Molly Kate, 4, and Abigail, 1, remains grateful 20 years later for the assistance he received from various sources. He urged students to not let those opportunities pass.

“There are a lot of really smart, talented people out there,” he said. “If you want to accomplish whatever your goals are — professional or personal like being a good parent — you have to work hard at it.”