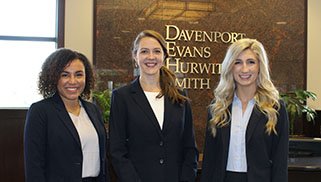 The following is an article from Prairie Business Magazine.

And a few other names that can’t be printed here.

In parts of America, the Great Recession hammered the economics of practicing law, and underemployed lawyers’ angry “scam blogs” (such as the ones listed above) have swung mallets at the situation ever since.

“My goal is to inform potential law school students and applicants of the ugly realities of attending law school,” declares one, with the alleged “reality” being “your huge investment in time, energy and money does not, in any way, guarantee a job as an attorney.”

Make no mistake, the national numbers have been sobering. Between 2008 and 2011, some 15,000 attorney and legal-staff jobs at large firms “vanished,” the New York Times reported. Unemployment among lawyers in some markets rose, applications to many law schools dropped. More recently, a few law schools have merged or even closed.

That’s not the whole picture.

In North Dakota, South Dakota and western Minnesota, it’s not even very close.

“I have never had anyone say to me there are too many lawyers in North Dakota,” said Tony Weiler, executive director of the State Bar Association of North Dakota.

“Believe me, lawyers love to voice their opinions. And I think if they all of a sudden started to not have any work, we would hear about it.

“Based on that and other factors, I know lawyers are busy, and there is demand.”

Eric Schulte, former president of the State Bar of South Dakota and a partner in the law firm of Davenport Evans in Sioux Falls, S.D., agreed.

“There really are opportunities to practice law in South Dakota,” Schulte said.

“I don’t think it’s the same situation as some of the bigger markets that you find on the East and West coasts. I think that our economy tends to be robust and healthy here, and I can tell you that from my perspective, we need more lawyers in South Dakota.”

Like other key elements of the economy, the legal profession in Prairie Business’ circulation area largely avoided the national recession’s most serious effects, interviews and statistics suggest.

Don’t misunderstand. As with the region’s housing market and household incomes, a big reason why the lawyers’ jobs didn’t “bust” is that they’d never “boomed” in the first place.

Instead, the region’s always-more-modest market for lawyers simply improved steadily.

That “always more modest” description is important to understand.

“If you’re thinking about a market like New York or Chicago, or if you’re expecting your first job as a lawyer to pay over six figures, you have to understand that that’s not realistic for North Dakota,” said Kathryn Rand, dean and professor at the Grand Forks, N.D.-based University of North Dakota School of Law.

But the context is vital when considering those sums.

For one thing, new lawyers who’ve worked hard can be reasonably confident of finding a job in that range. “Definitely in South Dakota, there are jobs for our grads,” said Devra Sigle Hermosilla, director of career services at the University of South Dakota School of Law in Vermillion, S.D.

“At graduation, about 70 percent of the Class of 2017 was employed already.”

And 10 months after graduation, some 91 percent of USD Law’s Class of 2016 had jobs for which a law degree was either required or preferred, a measure of job quality. That’s well above the national average, which is about 75 percent.

For another thing, USD and UND are two of America’s least expensive nationally ranked law schools. Law students at New York University pay about $64,000 a year in tuition and fees; for North Dakota residents at the UND law school, the comparable figure is about $12,000.

A lawyer who owes little can choose lower-paying options such as assistant state’s attorney, the nonprofit sector or rural practice.

Schneider graduated in 2008 from the Georgetown University Law Center in Washington, a pricey private school. “Without scholarships, I would have graduated with extremely high debt, as many of my classmates did,” he said.

“There would have been no way I could have come back to North Dakota and become a state senator.” Instead, a Big Law position in a place like New York, Washington or Chicago would have been his only option, Schneider said.

Schneider has worked in private practice in North Dakota since graduation, which means he’s seen nine classes of new attorneys graduate from the UND School of Law. He’s met many of those graduates in his practice and his Senate work, and his conclusion about the job market is clear:

“If your goal is to work at a ‘white shoe’ law firm, then maybe go somewhere else – Northwestern, or someplace like that,” he said.

“But in our region, you can be an excellent attorney and make a good living with a North Dakota education. It’s such a public benefit to have a law school that provides these benefits, and the educational opportunities that it offers are a really good deal.”