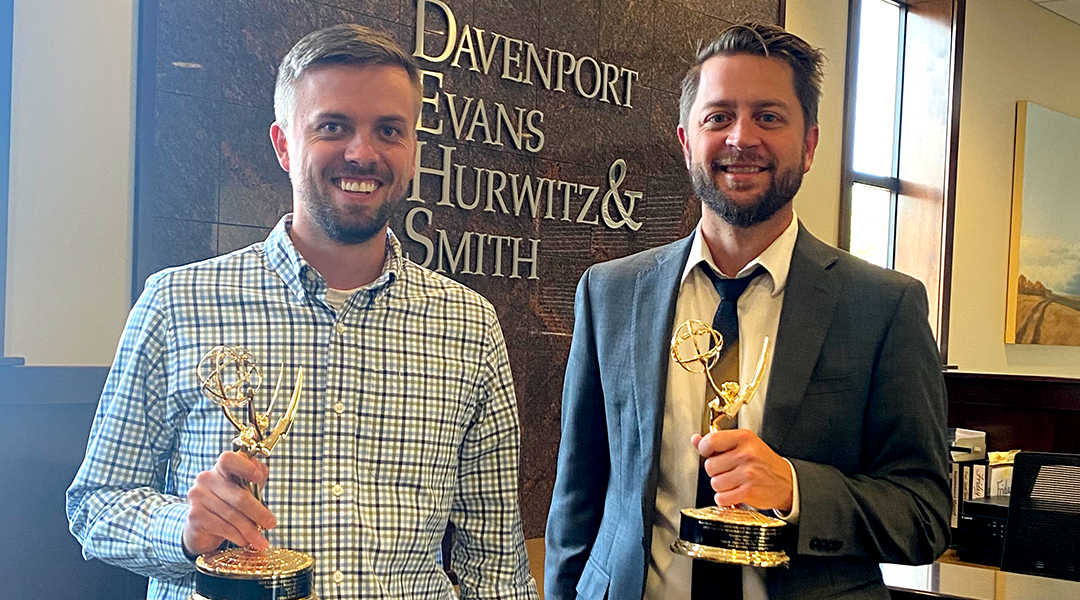 With the 74th Annual Emmy Awards airing tonight on NBC, Davenport Evans thought it might be fun to introduce you to our two Upper Midwest Regional Emmy® Award-winning lawyers, Dillon Kober and Joel Rische. We asked them about their award-winning projects and their picks for the top stars and shows of the season.

Q: You’re a lawyer. What kind of glamorous pre-law experience brought you an Emmy Award?

Dillon: Prior to law school, I worked as a Producer for KSFY-TV (now Dakota News Now). In April 2018, a strong blizzard hit parts of South Dakota, Iowa, and Minnesota – making travel dangerous. KSFY aired a special Saturday morning newscast to keep viewers informed about the storm. There were a handful of reporters covering the conditions across the area and several meteorologists in the studio. The newscast won the 2018 Upper Midwest Regional Emmy ® Award for Newscast – Weekends.  I was the Producer of the newscast, but there were many individuals who braved the weather to provide up-to-date information to viewers.

Joel: Before becoming a lawyer, I worked at South Dakota Public Broadcasting.  One of the last major projects I worked on was a historic documentary called “The Stavig Letters.”  It told the story of a Norwegian immigrant who settled in the Sisseton area in the 1800s who continued to write letters to his brother in Norway for the rest of his life, leaving behind a remarkable record of what it is like for an immigrant to leave everything they know behind and start out in a new land.  The documentary won the 2011 Upper Midwest Regional Emmy ® Award for Historical Documentary.  I was one of many people involved in making the documentary, and my role was primarily as a videographer, shooting reenactments in the historic Stavig house in Sisseton and, memorably, driving through snow-drifted country roads in the area to get scenic shots to reflect the harsh winter conditions experienced by the Stavigs (and everyone else in the area).

Q: What made you change your path to law? Do you feel your work in broadcasting brings advantages to your practice?

Dillon: Pursuing a legal career has always been a goal of mine, and after working for several years in local journalism, I decided the time was right to enroll in law school. My background in broadcast has allowed me to make valuable connections with many people in the Sioux Falls area and understand how legal issues arise in everyday life.

Joel: There were a variety of factors that led me to change career paths.  One of them was the opportunity it provides to advocate directly for clients and help them navigate often difficult problems.  Broadcasting and lawyering both require communicating often complex ideas in a simple, straightforward manner, so my experience in writing for television helps me keep my legal writing clear and concise.

Q: The 74th Annual Emmy Awards air tonight. So, our final question is, “What are your top picks to win an Emmy Award this year?”

Dillon: My wife and I were hooked on Squid Game, so that is our pick for Outstanding Drama Series. However, there is some stiff competition in euphoria and Succession. I also like Hwang Dong-hyuk in the Outstanding Directing for a Drama Series category. Overall, I am excited to see how Netflix Original series perform at this year’s Emmys.

Joel: I’m a big fan of Ted Lasso, and I think it has a good shot at Best Comedy. Tony Shalhoub is great in The Marvelous Mrs. Maisel, but the best supporting actor category is stacked with amazing performances, including from Nick Mohammed and Henry Winkler. As the son of a teacher, I’d like to see Quinta Brunson win for Lead Actress for her role in Abbott Elementary.

About Dillon and Joel

Dillon Kober is a business lawyer whose practice covers all aspects of business transactions, including real estate transactions, drafting and negotiation of contracts, matters related to limited liability companies and corporations, leasing and financing arrangements. He also counsels clients in estate planning.